Sikkim witnessed its first ever hike and fly paragliding adventure expedition. Delhi based Travel Photo Journalist PARVIN SINGH follows a team of paragliders on an expedition to Nepal-Sikkim border in West Sikkim and records how they made their first big leap in the air at 12,000ft.

“Well done, you’ve made it!” A group of paragliders- local and international – cheered me as I reach kalijar, showing my tent for the night pitched at 12,000 ft along the Nepal- Sikkim border.

It wasn’t an easy task to trek with the professional paragliding pilots, not at least for a non-trekker like me from Delhi,to make that steep ascent in the mountains within a matter af seven hours. Yet the idea to trek to Phoktay Dara from Uttray in sikkim’s West District, upon completion of the first international Paragliding festival in Gangtok, was novel-to witness the pilots take off from an altitude of 12,000-ft and sail over the amazingly laid 360 degree view of Mt Khangchendzonga and Mt Everest, and then see them plunge into the plains of Jorthang, a town on the bank of river Rangeet. 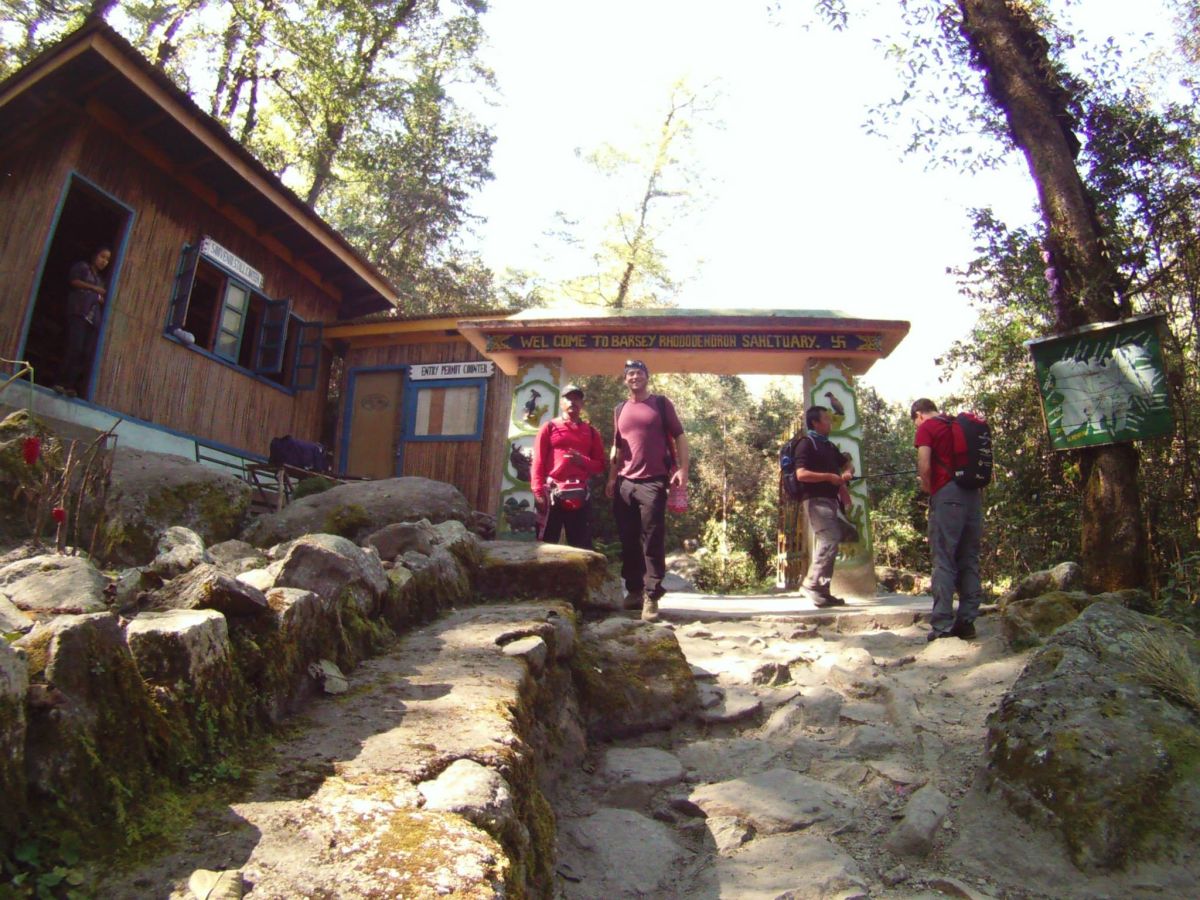 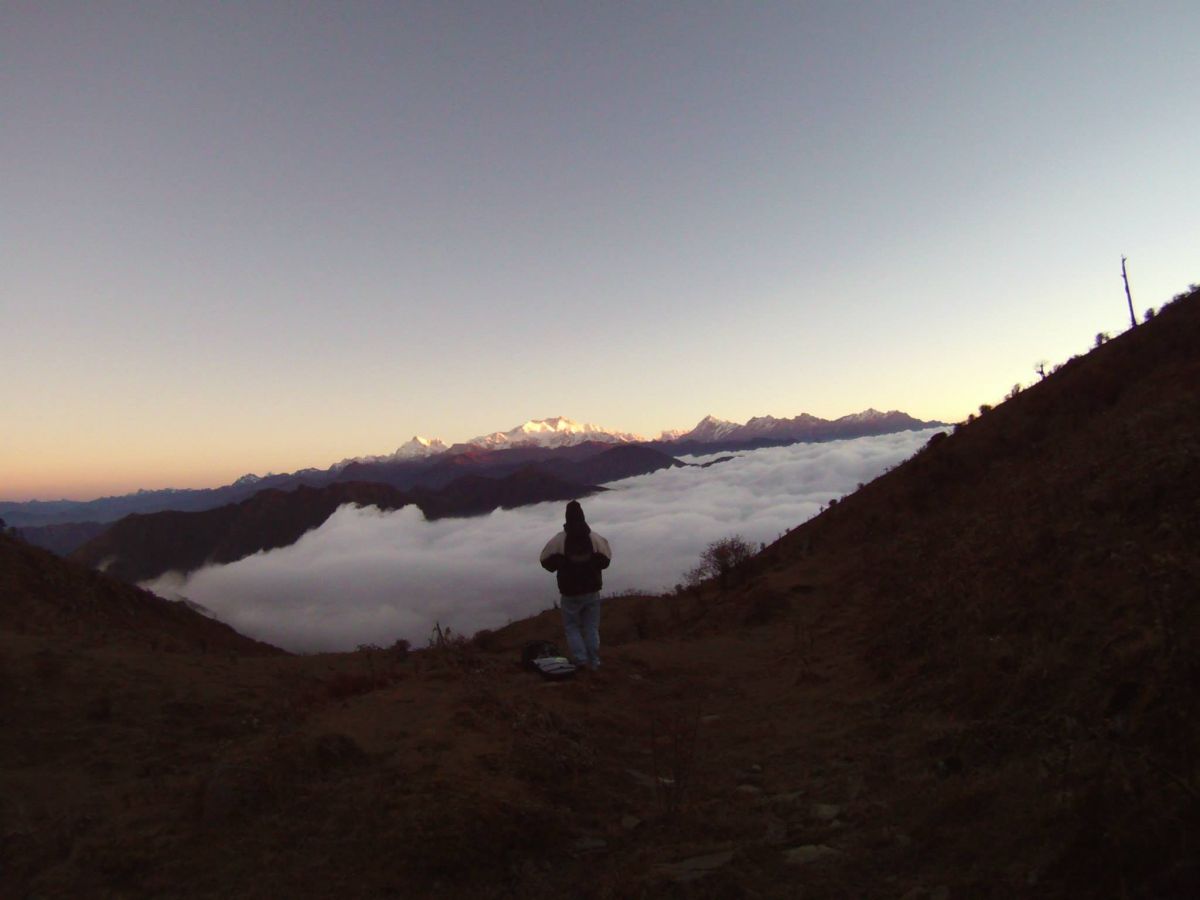 Suddenly Suddenly, in the dark, I could see Jim (James M Orava ) sitting on a stone seat, waiting for me. I was completely exhausted by now. Jim took out his emergency head light and gave it to me. He even offered me some dry fruits and juice from his special reusable bottle. Kalijar was still fifteen minutes walk from here. As we made our baby steps in the dark and paths strewn with boulders, we could see a spot of light at distance . Jim whistled. And someone whistled back. I breathed a sign of relief. It was here everyone congratulated me. Later when I Narrated this to my friends in Gangtok, some of them sighed at Jim’s kindness. After drinks, dinner and discussion we made an early entry into our sleeping bags. 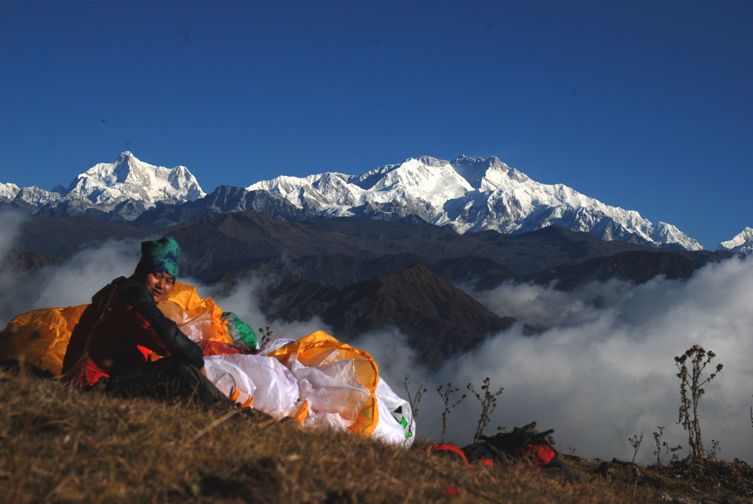 Next morning, I was up by 4:30 a.m. As I popped my head out of my tent, the entire valley before me opened up like a heaven a view that I find words in sufficient to describe. I took out my camera as the effect of the sunlight kept changing the colour of the peaks every now and then and of the valleys too. Nature at its best. The miracle continue for about an hour I could manage to take some wonderful pictures. And then as advised by Raju, I climbed up a nearby hillock , took out my cell-phone and called up friends to announced of my ‘tryst with nature’. Meantime, the experts made the 45-minute climb to Phoktay Dara to take a recce for flying and to see a proper launch site. They climbed down with good news. After breakfast all of us trekked to Phoktay Dara. 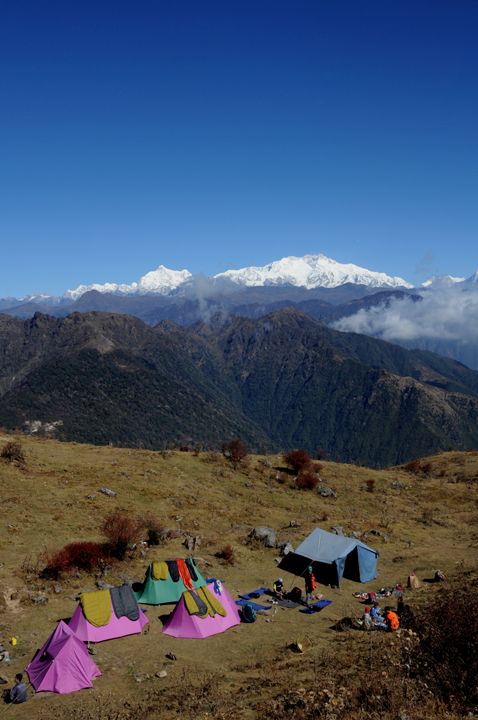 In the afternoon , after lunch, the pilots kept studying the terrain, thermals and wind pattern and found that the wind gradient was strong and the change of launching nil. Third morning. The air condition deteriorated and the pilots decided to trek back to a lower point called hilley. For me, the weather talk’ the pilots were discussing was out of my intellect, through it did bother me at times , for Photographers should. I decided to try out something else, my meditation . Leaving the team aside, I went up the hill, and chose to do my morning prayers and mediation. Strange as it may sound, just as I found them arranging the gears to fly right away. Some of the guys were conscious that my prayer worked.

I kept my cameras ready. Within a stipulated time, Arjun took the lead and with a successful take-off from a height into the deep valleys. He will land at Dentam. It was Jim’s turn now. From a photographer’s point of view, the way Jim took the flight was soothing to the eyes just like an aeroplane making its first zoom in the sky. 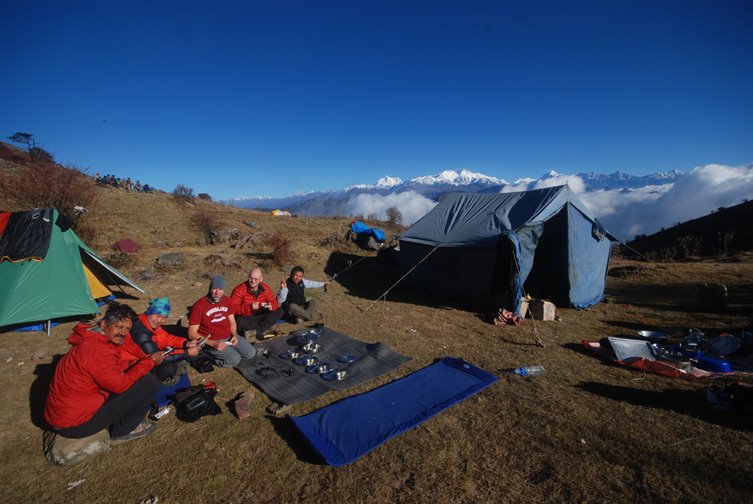 Now Raju, like always, devised a different take off on the higher side, and I managed to take really good picture of paragliding against the backdrop of Khangchendzonga. Ed and Sanjay followed suit. With this successful take off from a height of 12,00 ft, the five paragliders have etched their names in the paragliding history of Sikkim. 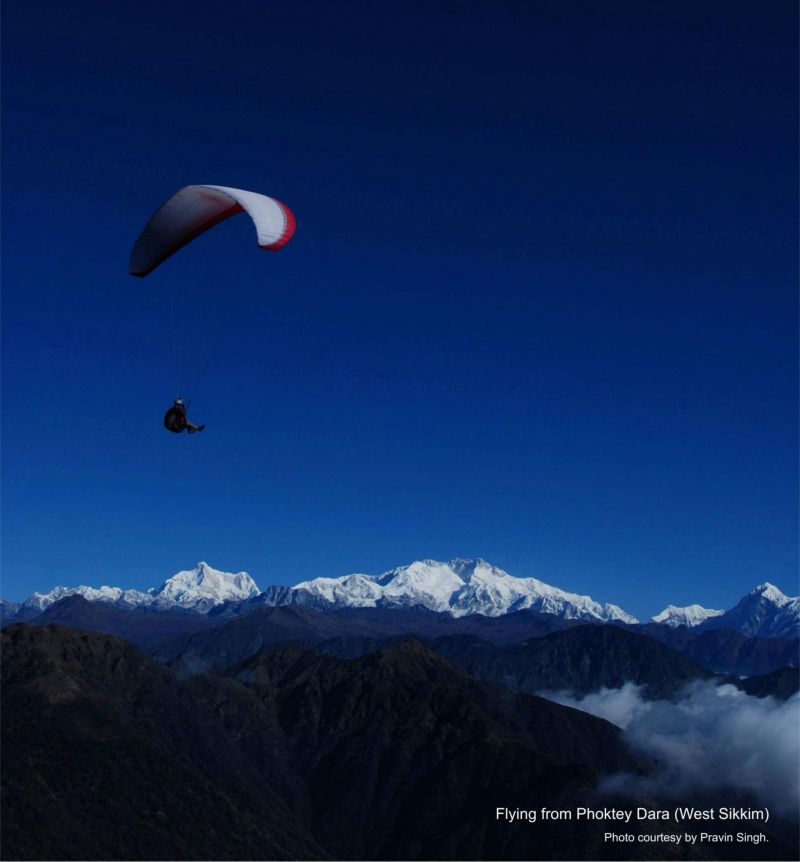 Bhaichung was with me and so were a posse of potters but I felt lonely. On Bhaichung’s advise, we trek downhill to Uttarey taking a short cut. On the way , as I walked down, I through the potential for paragliding in Sikkim cannot be ignored, thanks to its wind pattern. When I landed at Bulbuley, the take off point for the first International paragliding festival, near Gangtok, it did remind me of Billing of 20 years ago, when it took off in a similar style- similar in fracture, and international paragliding sailing with aspiring local fliers as spectator! Today, Billing in Bir, Himachal Pradesh is the world’s top three paragliding destination. With Sikkim Tourism & Civil Aviation department’s zest to promote adventure sports such as this with technical support from paragliding Association of India, Sikkim seems never too far away from creating a record. The way Sikkim has set out in paragliding and has taken its lead up the sport in the right spirit.

We reached Uttarey within three hours, two hours ahead of the scheduled rime. But I would discourage trekkers to take this short cut. Or else you will end up losing your feet nails like me. At Uttrey, a vehicle took me to Chakung, where the pilots were waiting for me beamed to see me as if i had scaled the Everest. 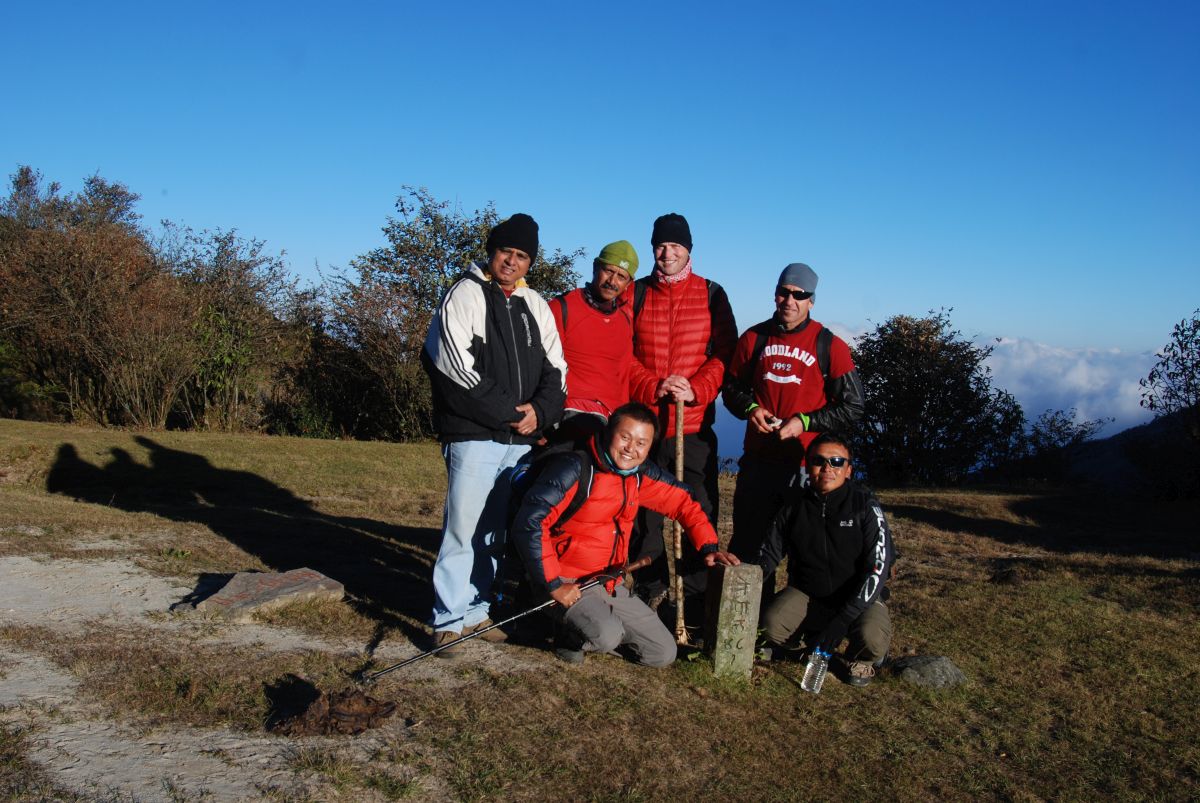 At Chakung we were kept at a homestay, another wonderful experience. My toes seem to ache badly but the hospitality and the warmth at this homestay served as a balm.

It was here Ed talked about Sikkim’s enormity in paragliding potential .i expedition and he request me to send few for his article on Sikkim paragliding in his Cross Country magazine which I think will surely give Sikkim a huge mileage to paragliding fraternity of the world.

The first morning at Chakung we made our final ascent to Durpinay Dara, from where the pilots who were supposed to fly to Namchi took Jorthang. Next morning Ed and Sanjay left for us came to Gangtok,with promises to meet in the next paragliding festival.